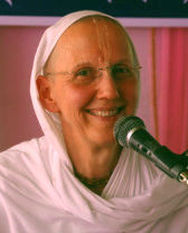 Devaki devi dasi was born in Germany in 1958 and after a long journey of searching, joined ISKCON in Sydney, Australia in 1985. She spent four years in the Sydney brahmacharini ashrama, learning the basics of devotional life. She took initiation from Bhavananda Prabhu and later re-initiation from Prabhavisnu Prabhu. She is now a disciple of His Holiness Niranjana Swami.

During her ten years in married life (1989–1999) she preached in Riga, Latvia, and spent adventurous years in helping to pioneer the first more organized temple in the former Soviet Union. In 1999 her husband remarried a non-devotee, and Devaki devi dasi then became a renounced traveling preacher, spending five months per year in India and Bangladesh, and the other seven months in various countries around Europe, including Eastern Europe such as Ukraine and Moldova. In the recent years, she has been expanding her preaching and also visits Canada and the USA. In the past Devaki devi dasi was also fundraising for the development of various projects and holy places in Nepal and Bangladesh. In Bangladesh she is actively involved in the IYF student preaching, conducting seminars and IYF festivals under the guidance of His Holiness Bhakti Purusottama Swami Maharaja.

During her years of service in Bangladesh, she developed deep insights into Vaishnava culture that have enriched her spiritual practices and inspired her preaching. She is sharing this wisdom worldwide in the courses entitled ‘Exploring the Roots of Spiritual Culture.’ In Ukraine she has served under the expert guidance of His Holiness Niranjana Swami Maharaja, spreading the culture of care for the past seventeen years: on a personal level by serving as a spiritual guide and mentor to many devotees, by assisting devotees to become spiritual guides themselves, and by lecturing and conducting seminars.

Devaki devi dasi has helped establish Bhakti Sangam Festivals in various countries and is regularly conducting Holy Name Retreats. She was serving for several years as a member of the GBC Committee for Devotee Care and promotes care of every ISKCON devotee to the highest level of priority in our movement. In March 2014 she established the Institute for Spiritual Culture and has published four books.